Skip to Content
This post may contain affiliate links. I may be compensated if you make a purchase through a link on this page.

Copper vs Sulfur Fungicide – Which One is Better?

Fungal infections can quickly kill your crops. And when it’s hot and humid, powdery mildew, leaf spot, rust, among other fungal infections, spread like wildfire.

However, you’re not helpless, as preventive measures can help keep fungi away from your garden. Also, quick treatment of infected crops can keep your losses minimal.

But with many treatments and preventive products available, it may be confusing on what best fits your crops. And you may be wondering if you should use copper or sulfur fungicide.

This article looks at the two preventive fungicides (copper and sulfur fungicides). It discusses their fungicidal actions, suitability, and their alternatives in controlling fungal infections in crops. Follow along as we analyze the two fungicides – similarities and differences.

(You may also want to read this article on neem oil vs copper fungicide).

Copper has a long history as a plant pesticide and fungicide, from the bluestone days (copper sulfate) to the development of the Bordeaux mixture (copper sulfate mixed with calcium hydroxide) in 1882.

Copper fungicides effectively kill bacteria and fungi, though they are highly phytotoxic. So, you should be extra careful with concentrations when applying copper to your garden.

Unlike sulfur, the Bordeaux mixture is not only fungicidal but also bactericidal. Meaning, it’s effective against both fungal infections like powdery mildew and bacterial diseases like life spots.

That said, copper does a better job in keeping infections away than treating them.

Ensure you follow the recommended application amounts once you buy the correct formulation for your crops.

Also, copper doesn’t break down in the soil and will eventually contaminate it after extended usage. Therefore, use copper fungicides sparingly.

Another vital thing to note about copper fungicide is its limited usefulness in treating overly diseased crops. Technically, it will only prevent new fungi from germinating but will not cure existing diseases.

For best results, apply copper fungicide before any signs of infection, or immediately you notice early signs. You can spray fruit trees and vegetables for 7-10 days until harvest time, but don’t consume freshly sprayed plants.

Always remember that copper prevents fungus growth by destroying living cells’ proteins, which can also happen to plant tissues. So, follow dilution directions to keep the copper concentration high enough to kill the fungus but too low not to damage plant tissues.

In addition, apply copper in late afternoons when the temperatures are below 85 degrees Fahrenheit, as high temperatures accelerate its phytotoxicity.

The roots will turn yellow if it rains immediately after applying copper to your crops, which is preventable by adding spray oil to your copper mixture.

Whether you purchased the copper fungicide in dust or liquid form, refer to the product label for specific application and safety directions. 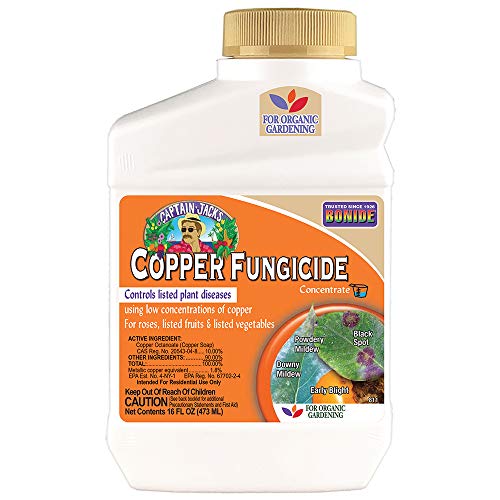 Sulfur is a preventive fungicide that suppresses the growth of fungal spores on plant surfaces. It’s highly effective if used in the right amounts before the disease develops.

In either wettable powder, dust, or liquid form, sulfur kills on contact. In most cases, sulfur is used for its preventive capabilities but can also treat powdery mildew and scab and suppress blossom blight and brown spots.

Apply sulfur at the start of the season and regularly after that to keep fungal infections away.

Also, continued use of sulfur eventually lowers your soil’s pH, which can negatively affect your crops.

Though sulfur is a good pesticide for controlling insects, rodents, and mites, its toxicity on aquatic animals, wildlife, and domesticated animals are low. It’s also safe for bees, though you should not spray the pesticide directly on them.

Ensure you follow the application instructions to keep your crops and other valuable parts of your environment safe.

The specific application rate varies with product form and target plants, and it’s always good to refer to use directions before application.

Wear protective gear like overalls, gumboots, waterproof gloves, goggles, among others, to keep safe when working with sulfur fungicide. Though it has low toxicity, you’ll likely have diarrhea and burning sensations if you ingest sulfur.

Also, inhaling the sulfur powder or allowing it into your eyes will cause irritation, coughing, and other problems such as rashes.

According to the University of California, using sulfur products on a hot day exceeding 90 degrees Fahrenheit increases its likeliness to burn plant leaves and fruits (phytotoxicity).

Also, you’ll need to wait for two weeks before applying sulfur on your crops from the day you used an oil product on them. 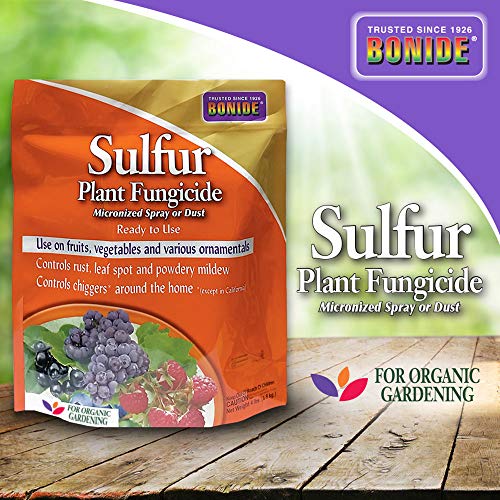 Sulfur and copper are protective fungicides, better at keeping diseases away from your crops than curing infected crops. They are both applied to healthy leaves or seeds to prevent fungus spores or mycelium from germinating. Both exist as liquids, dust, or wettable powders, which act on contact.

Though both are effective preventive treatments, copper fungicides are more effective but higher in phytotoxicity. Also, copper is highly contaminating to the soil and should be used sparingly.

In most formulations, the active elements are relatively insoluble, reducing their ability to kill plant cells while maintaining fungicidal action.

But the good thing is that these two fungicides can be used to grow organic produce and their toxicity to animals and marine life is low. (BTW, you can also use neem oil or hydrogen peroxide as a fungicide).

However, both cannot be used concurrently and requires different waiting periods after application to harvesting.

Be Certain Before Your Spray

To save money and salvage your crops on time, properly diagnose infections before implementing any treatment or preventive measures. Good plant health management pegs its effectiveness on proper diagnosis, ranging from comparing symptoms with disease descriptions to lab-testing samples.

But, the most accurate diagnosis comes from certified testing of diseased crops in plant labs, plus identifying the right pesticide or fungicide to use for treating the identified infection.

Also, remember to follow the directions given by the manufacturer and using the product on non-allergic plants only.

The Label is the Law

Whichever fungicide you settle for, its effectiveness depends on the proper application and the right timing. And the label directions have all the information you need–it’s the law, follow it.

There are details on the right time to apply the fungicide on your crops, the adequate amounts, plant sensitivity to the active ingredients, preventive measures as you spray, among other crucial details.

Technically, you can use less of the specified fungicide on your crops, though at risk of lower effectiveness. But you cannot use more than the directed amounts without hurting your crops.

In some cases, a range of application amounts based on disease pressure is given, and you’re expected to use proper judgment in choosing the right amount for your crops.

Also, the manufacturer will list all the plants sensitive to the fungicide, and you better not ignore the guideline for apparent reasons. However, you can use the fungicide on insensitive plants to control other diseases not listed on the label.

Another critical thing to note is the application time and supportive additives. For instance, when used on a hot day, some fungicides like sulfur increase their toxicity on crops.

Also, some additives like spreader stickers enhance the effectiveness of the fungicide, and it’s recommended you add them while making the solution.

Fungicides protect healthy plant tissues but can destroy them, too, if misused.

Please read the label directions thoroughly, and follow the precautionary and safety measures as directed. Most fungicides are dangerous to animals, humans, and aquatic life in their concentrated forms.

Use protective gear as advised to prevent ingesting, inhaling, or absorbing the fungicide as you work with it. All in all, fungicides should be a supportive measure to other disease control practices like crop rotation.

Healthy plants are every gardener’s dream. And keeping your crops healthy starts way before putting your seeds into the soil.

Generally, the key to healthy plants is to prevent disease development, right when preparing the land for planting.

Do your homework to know which crops match the planting site’s soil type, climate, and watering conditions.

Practice proper sanitation, an appropriate supply of nutrients and water, and necessary pruning, from planting to harvesting.

Simply put, fungicides should be part of a plant health management program but not the sole approach for disease control. They should support other plant-focused strategies like:

When it comes to plants’ diseases and other diseases, for that matter, prevention is better than cure. Copper and sulfur fungicides help keep your crops free of fungal infections and treat diseases caught in their early stages. However, they should be part of your plant health strategy, not the sole control method.

Again, remember the two fungicides have phytotoxicity, which increases with concentration, temperatures, and other conditions like rain after application in copper. Always follow the label directions to prevent damage to your plants while keeping your environment safe from contamination. And the baseline is, correctly diagnose the plants’ infections before applying any treatment. In addition, once you have the right product, follow the label directions to the letter.